Usually this question is accompanied by a wide grin. Disbelief. What kind of parents would name their daughter after the catch of the day at every single seafood restaurant in the United States?

Yes, I nod and smile back.

This gives pause. Then the grin gets even wider.

Mischief has joined disbelief and the mood now borders on playground taunting. You poor traumatized child, is really the main thought. At least I like to think it is. Still, there appears to be a measure of satisfaction in doubling the awkwardness by saying it twice. The fish fully named, first and last.

This sets the mind on an entirely different track. When I agreed to be called by this name I had never been in the States and thought Mahi Mahi was a dolphin in the Flipper family. I never dreamed Mahi Mahi was a kind of dolphin fish that people eat. But it feels silly to bring that up. Besides, the wheels have already rattled into place, and if the association hadn’t been made from the very beginning, this does the trick. (Nickname? Oh my God, why?) Discomfort shows its face briefly, but the Freudian slurs are usually kept in check. More movement of thinking wheels, followed by sudden, elated incandescence. (The accent. Her features. No wonder I couldn’t place them!)

You must be Hawaiian!!!

This obvious solution brings merciful release from further cerebral wanderings through muck. Mahi is a Hawaiian word. It must be a perfectly common name there. And if you squinted until you could see your eyelashes and avoided looking directly at me, well I suppose anyone could think I’m from Hawaii.

I smile once more. Puzzlement. This option had been far beyond the perimeters of consideration.

No, I’m from Holland.

I’ve given up referring to my native country by its official name, the Netherlands, because this often evokes questions like Is that in Amsterdam? (No, it’s the other way around.) or So you speak Danish? (No, I speak Dutch.) (But that’s German.) (Dutch is a Germanic language, but it’s not German. The German word for the German language is “Deutsch”. The Dutch word for the Dutch language is “Nederlands” – note the similarity to Netherlands. Unfortunately, when you add the English language into the mix, everything gets jumbled – Holland, Netherlands, Dutch, Deutsch. Not to mention the damn Danes. Those would be the people from Denmark, who also happen to live in the general northern European vicinity and who speak Danish. Trust me, I completely understand the confusion, and I’ll spare you my soliloquy on the Dutch word for the German language and the Dutch national anthem.) I don’t blame anyone for this. I have lived in the United States for 15 years, and I still can’t name the capital of Rhode Island, which I’ve been told is a state comparable in size to the Netherlands. Who has time to remember these things? Holland pins down the customary geographic imagery for most people. Windmills. Tulips. Wooden shoes. And it leads to more puzzlement.

But you don’t look Dutch!

This is a fact. Typical Dutch women are amazons. Tall, blond, steely-light-eyed, fair-skinned, well-endowed amazons. I am none of those things because my father is Indonesian and my mother is a Dutch woman of the shorter, darker-haired variety. Which I explain. Then I try to quell the increasing bewilderment as best I can.

Mahi is my nickname because it sounds like my real name, which is Margriet.

Frowns at the guttural snake that just slithered out of my mouth. Meet my mother tongue.

You are so wonderful for trying. Really, I mean that.

To tell you the truth I have a hard time saying my own name. The human mouth was simply not designed to produce such underhanded acrimony.

This is as close as you will ever get, and I’ll take it.

That’s pretty good, I say, gently trying not to be too encouraging.

You’ll keep trying if I am. No need for this mutual torture. I know you agree.

I think I’ll stick with “Mahi”!

You laugh, relieved you now have a legitimate excuse to call me that. Like the fish. 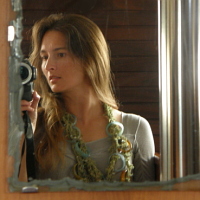 Mahi was born in Amsterdam and grew up in the Netherlands, until she moved to the US at age 19. She has made art ever since she learned how to pick up a crayon, and has studied and worked in the design and art fields most of her adult life. Now based in South Carolina, she has lived in the Caribbean, Florida and California.

The greater part of my jewelry collection consists of one of a kind and very limited series designs. Most pieces are made of recycled precious metals, all are handcrafted by me. My work is created with the intent to bring out natural beauty, which I believe is most poignantly revealed through the juxtaposition of nature’s perfect design with the irregularities of the organic form. I enjoy using precious metals to enhance shape, color, and luminosity of (semi-) precious stones, while leaving behind the occasional mark, push, brush of my hands and tools. It is this fusion of wondrous radiance and innocent imperfection which makes them -and us- beautiful.

My art wants most of all to be felt. For me, good art connects with the beholder in a way that cannot be directly expressed with words, but is instead experienced on an emotional level. Through this connection, a path to further reflection, meditation, and perhaps even healing of the spirit is opened.